The Responsibility of a Fan

If you’re a comic book fan like me, you’re likely a little mortified and perhaps amused by a controversial recent comic book cover drawn by also controversial artist Frank Miller. For those of you not familiar with the man or his work, I’m including an image of the “drawing” below. 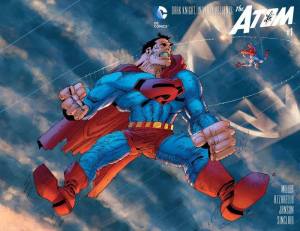 Yes, that is how Frank (Who is sadly not looking well these days.) chose to depict one of the most iconic characters in popular culture. You can clearly see Kal-El’s cock outline bulge through the garment he is wearing. The hands are reminiscent of something out of King Kong and the story, a tie in to the upcoming Dark Knight 3: The Master Race screams cash grab.

But, this piece isn’t about the art. I am typing this up in my new apartment/lair for brooding as I wanted to draw your attention to a specific credit that can be found on the inside. I know this may be very silly to say, but it’s a credit I am immensely proud of. I’m posting it below too.

Finally, after more than 70 years, DC has decided to give credit to Bill Finger for his instrumental work on Batman, one of the greatest characters ever created in the history of pop culture. Though he’s not around to enjoy it, his heirs are beside themselves with happiness.

It may seem like grandstanding, but I feel like I played a part in making this happen. When I discovered Bill and his contributions to the character whilst finishing my senior year of high school, I felt sick and morally disgusted that my money spent on merchandise related to the Dark Knight had gone into the pockets of someone’s heirs who did not deserve one lousy red cent.

From then on, I resolved that I would do whatever I could to educate people about this matter. As a fan of the American Superhero, I believe that I should conduct myself in a similar mindset with respect to helping their creators who are struggling and people who are hurting in a basic sense.

And so, I went to work. I began writing letters, I confronted Michael Uslan about Bill not getting credit when he came to speak at my college, I posted a YouTube video to educate people and even donated a valuable piece of art to help fund a documentary on this cultural and artistic genius.

And now, I can rest. Sure there will likely be another struggle to move on to (The way Marvel treated Bill Mantlo before Guardians of the Galaxy came out is just as reprehensible. I encourage you to look that up dear reader, though it will probably make you incredibly angry.), but I’m ready to do so. As fans of these properties, we all have a responsibility to help and do whatever we can when a creator is having trouble in their life. They gave us endless entertainment, they do not owe us. We owe them, we owe them an immense debt that can never truly be paid back at all.

← To Mars, Post Haste
Skeletons in the Closet deserve to be Seen →