I played a Doom Map made by a Columbine Gunman, here’s the Story

There are many urban legends on the internet. Slender Man, a supposedly haunted Legend of Zelda game cartridge and even I still remember Annora Petrova. However, none of these famous tall and occasionally frightening tales measure up to the Harris Levels in id Software’s Doom.

As I’ve previously written about elsewhere, after the Columbine Massacre in 1999, rumors quickly spread through the shoddily maintained media landscape that the leader of the two gunmen had created a practice level mimicking the layout of his school in the popular game. Predictably, hysterics ensued; people began to fear players of the Sci-Fi shooter and supposed actual copies of the alleged files began to pop up online, thus creating the current myth. Being the intrepid writer that I am, I decided to go see if any of these levels were actually authentic.

I didn’t think I’d find anything, until I did.

Yes, it is true that one of the gunmen in this American tragedy that is but one of many in a depressing line crafted levels for a video game he liked to play. However, none of them resemble his school as several media zealots in the past have erroneously claimed. I found one called UAC Labs and spent all day working on getting it to running on Windows 10.

The game starts off innocently enough with the Marine standing outside the entrance to a facility, armed with a pistol. 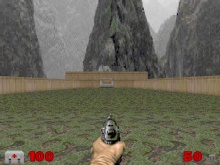 A metaphor for the mans demented worldview?

From there, you venture into a facility with a standard couple of locked doors and a shit ton of high level monsters. Mostly, this section is fairly reminiscent of the vanilla games first level. You can go outside and fight an army of Cyberdemons, but I’m not sure you’d survive (On a side note, the gunman changed the sounds for this baddie group. It’s really unnerving).

Little Douche-bag thought this was fun. Maybe for him, but I didn’t enjoy it.

After collecting the requisite key cards and blasting your way through the level, you continue onto the second act. Here, much like the boys mind, the Doom Marine is in darkness. You engage in some dull 2D fighting and then head outside.

At this point, I’ve concluded this was designed solely for players to suffer.

And after slogging through yet another glut of enemies, it’s over. Ultimately, after playing through this mod I did feel a little weird, but also couldn’t help but laugh. This child who thought he was above everyone else made a sub-par piece of game design that he once referred to as “his life’s work”. If this is the best he had to offer, we should be glad he’s not around anymore. I only hope that no one out there reads his extort to “Kill em All” and feels motivated to do so in the future.

Video Footage of the Mod:

← Another Horrific Shooting: What some Media Outlets are doing wrong
A Digital Life after Physical Death: Managing Online Assets in the Modern Era →

I also have an email with secured features. evan.pretzer AT protonmail.com. I can be reached at either email and will respond within a week.